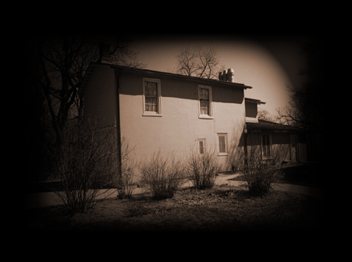 What would it be like to face your own mortality and see exactly where you would soon be buried? One would need to ask Mrs. Jemima Howard, wife John G. Howard.

Nestled in High Park is historic Colborne Lodge, once home to the Howards who were the benefactors of High Park to the City of Toronto. Their home still stands and is a tourist spot in the massive park near Lake Ontario in Toronto's west end. Across from the home stands the grave and monument to John and Jemima, whose huge stone dominates the scene from the house's front windows. The fence and gates are are made from wrought iron from St. Pauls Cathedral in London which is fitting for someone who gave so much to his adopted city. Jemima passed away before her husband after a long term health issue (probably breast cancer) that kept her constantly medicated "to kill the pain". Her last days were spent gazing through a morphine and laudanum haze at the site of her own burial and the future site of her husband's. Jemima Howard passed away in 1877 at the age of 75.Even in recent times, there have been sightings of a ghostly woman peering out the second floor windows past the road at the memorial monument, and even a ghostly sighting reported by a police officer in 1969. Along with the apparition, there are definite cold spots around the home and reports of poltergeist activity in the lodge. Is Jemima still looking sadly out at her burial spot? 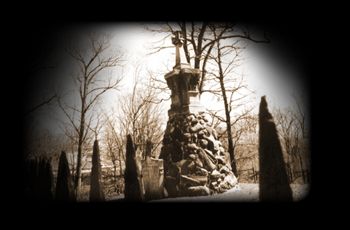 On a recent visit, however, we were told by a staff member who we would qualify as "ghost friendly" that there really isn't much to the stories and it is true that recent reports are few and far between. This staff member also pointed us toward Todmorden Mills and Fort York for places that have more current reports of ghostly phenomena. Granted, we have also spoken to the desk sergeant of the police officer who took the report about the ghost from the motorcycle officer and he feels that this fellow definitely saw something and it wasn't a mannequin or trick of the light. A very interesting spot and well worth visiting regardless.

Update September 2007 - Please note the strange experience recounted below is from 1992.

When my son was 3years old my mother and myself decided to take a tour of Colborne Lodge in High Park. Going on the tour was an experience. As we took the tour through the house I had an uneasy feeling that someone or something was walking with us. I shrugged it off. And continued on with the tour.

We ended up at the Carriage House. Looking at this old black stately carriage, and I felt again someone looking at us.

Finishing up with the tour, the tour guide said thank you and goodbye. As, we were leaving the Carriage House, walking up towards the main road in the park. I was holding my son's hand and felt that feeling of being looked at again. This time, I turned around and in the tall grass behind the house, just a few steps from the Carriage House was a man. He looked like he was alive. However, the thing that freaked me out was that he had mud ducks and was dressed in a long black coat and had a high white collar. His eyes were black and he had no expression. I quickly turned back around and started to pick up the pace. I did not turn around again. As I felt if I did he would have been right in front of me.

The strange thing is, after that incident. I went to a psychic who told me that "I hear them knocking, but I won't let them in," and I have never been back to High Park since that day. Again, when I drive by the park, I get this strong urge to go up to the Lodge. However, my fear of the unknown holds me back.

I have never seen a picture of owner of Colbourne Lodge. Therefore, I couldn't tell you if what I saw was him."

Our thanks to the witness for this report. I sent a copy of a portrait of John George Howard to the witness, and she replied, "Thank you for the picture. The face seems familiar, but the man that I saw was much younger. Black hair. and the large mud ducks.


Do you have any information to add? A report or experience? Please, e-mail as at This email address is being protected from spambots. You need JavaScript enabled to view it.