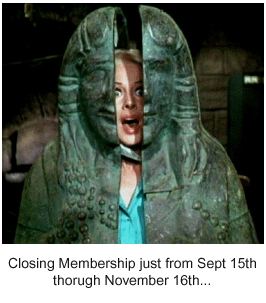 Okay, those bits out of the way, I figure I should explain why we "shutter" the new membership applications until November 16th...

First, let me thank people for their interest and again, re-iterate that the membership process is free... no charges. Next, we know that some people "stumble" over us because of the cultural attention we get at this time of year and want to get going "Right Now!" and are miffed when we say "Please hang on and try back in November..." but when you see the reasons why, I think things become a bit clearer...

Our overwhelming experience has been that people who "sign up" during Halloween are only interested in doing this study at and around Halloween... We need people who, like us, are interested and working around Christmas, Valentines Day, and indeed, in June, July, and early August (which, as stated, tend to be the busiest times for us,) and again, we have had hundreds of people "sign up" during Halloween time... and then vanish by mid-November.  As this isn't a business and we don't profit in any way from anyone, the amount of work to set someone up, get everything in place, and then have them suddenly vanish is a bit much. It's one of the reasons animal shelters don't let people adopt black cats in October... or baby chicks and bunnies (if available) around Easter.

We have figured out that people that join reasonably long after Halloween and before the stores really start their Halloween decorations, tend to be what we are... which is pretty serious about this topic... and as a potential witness or someone writing to us for information, aren't you happier that our people are still "on topic" in February as well as October?

Next is the idea that some people have that they'll send us some cash (nope, it's free...) and an e-mail (nope, it's a free downloadable course,  an online exam, and then we expect two articles about the topic which will be reviewed before you're on the team,) and we'll hand them the keys to a haunted house where they can have a grand ol' time... and that's not really what happens.

Yes, we do do the occasional investigation... maybe four or five a year... but most of the time, it's really academic stuff... discussing cases, coming up with hypothesis, discussing ideas, reading and talking with friends and colleagues.

I can state with some certainty that there has never been an instance of one of our team members being "scared" to the point of losing control of their bodily functions. That's not bravery, that's just how things are.

Now, I can sense a few people reading this and thinking, "But that's not me! I'm interested! I love the idea of a more academic approach to this topic! How come I'm penalised for other people in the past and can't join right now?" and honestly, I feel your pain as someone who, like you, is extremely interested in looking into these things... but if you are like me, and can't wait until November 16th, we might not be a good fit for you as it can be a long time between cases and reports for individual investigators and researchers... and, I hate to say it this way, but if you're really interested, you should be able to hang in there as it's difficult to believe that your interest will wane so dramatically between now and November 16th. I know that sounds harsh, but like I said, we need people who can devote time and brain cells to this study... it's why, I hope, you came here... slightly better than reality-ish television fare with a local slant.

So, if interested, hang in there! Try us back on November 16th and on or before September 14th... and we'd be thrilled to have you on the team if all goes well!