Most Torontonians and 99% of University of Toronto alumni are familiar with the story of Ivan Reznikoff and Paul Diablos, whose fight managed to give U of T one of its most enduring legends and Toronto one of its favourite stories.

Legend has it that during the construction of this gothic revival building, a Russian stone mason named Reznikoff was courting a young lady native to Toronto. Apparently, Mr. Diablos, a Greek mason, was seeing the maid on the side as well. Legend says that Diablos even carved two gargoyles that adorn the university, one an image of Reznikoff and another of Diablos, laughing behind his back.

When Reznikoff found proof of his girlfriend's infedelity, he immediately confronted Diablos and a fight began near the construction site.

Reznikoff chased Diablos through the unfinished building with an axe (taking swings at him and once, missing him and leaving an axe mark on the door that's still visible to this day), and the duo ended up high in the unfinished tower. Reznikoff took a mighty swing, missed, and plummeted to his death. (In other accounts, Diablos sneaks up on Reznikoff and stabs him to death.) Diablos, to escape blame, buried Reznikoff in the foundations of the building and vanished from Toronto.

Years later, after a devestating fire in 1890, the remains of an unidentified man were unearthed at the college.

The apparition of Ivan Reznikoff has been sighted (and even, in one case, spoken with by Sir Allen Aylesworth when he was a student here) by the students and staff of University of Toronto's University College. There are also reports of poltergeist activity in and around the connected buildings.

In admiration of the tale there is a Diablos Coffee Bar in one of the buildings at U of T near University College.


Soldier's Memorial Tower
The Soldiers' Tower is a monument to remind the university community of students and alumni who died during the First World War.

There is a long-standing tale of a ghost of a repairman who fell to his death while polishing the bells in the 1930s. His apparition has been reportedly seen near the tower and strange lights have been occasionally seen coming from the tower windows.

The Soldiers' Tower Committee informed us that this story seems unlikely since the bells, first of all, are not polished, and secondly are situated in a room, the floor of which is about one metre below the lowest bell. Metal mesh covers the windows in the room to prevent birds from flying in, and a person would not be able to fall out. Furthermore, it is possible if people have seen strange lights in the tower at night, that they could be from the interior lighting. So, the ghost story seems inconsistent with the physical layout of the tower. 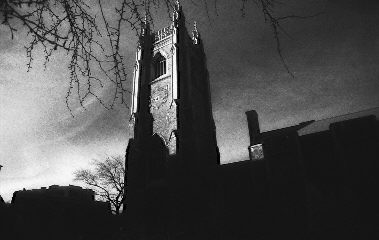