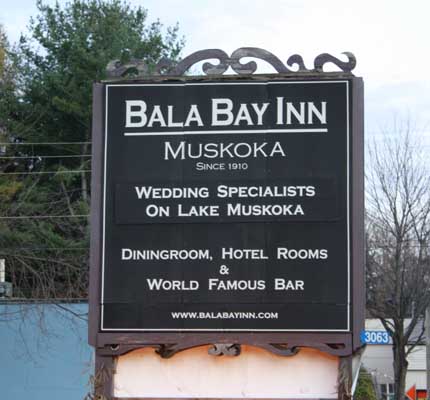 Bala Bay Inn was originally built and opened by E.B. Sutton on July 17th 1910 under the name the Swastika Hotel (a swastika in Sanskrit means good luck). Why Swastika? There is a town that was founded two years prior in 1908 much farther north than Bala Bay also named Swastika. Two miners discovered a gold vein in the vicinity while looking for silver and named the site of their gold mine thusly. Residents of the town of Swastika once put up signs that read, "To Hell With Hitler: We Had the Swastika First" but we digress. Perhaps Sutton was inspired by the name of the town in the naming his new hotel? 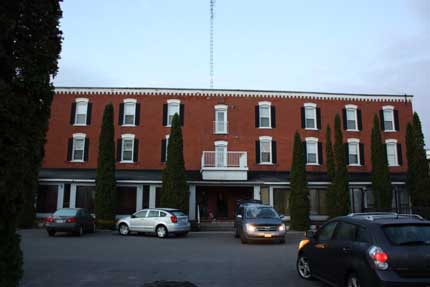 Since its beginnings the hotel has gone through several name changes, and financial ups and downs, and is presently (2011) in the hands of Kimberley Ward and Chris Grossman. 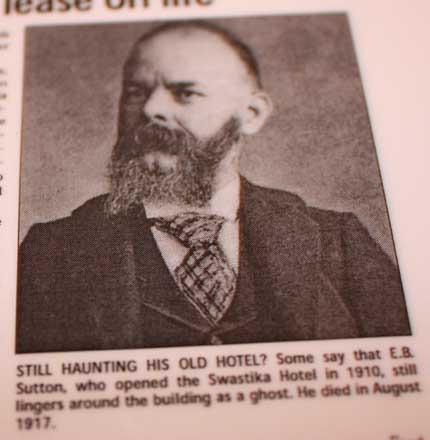 E.B. Sutton was a talented individual who wrote music and also articles for the local newspapers of the day. It is rumoured that he never left the hotel, and his spirit may still be there.

The history of the hauntings, and ghost stories associated with this hotel are long and well known. The Inn has been investigated by several different paranormal groups over the years, and they even have a ghost tour there.

Through our founder/director Matthew Didier the Ontario Ghosts and Hauntings Research Society - OGHRS were invited  to visit and document ghostly reports at Bala Bay Inn on October 28th 2011 A small team was assembled and were accompanied by Dave Newman and Brian T James of FM 105.5 radio. The hotel had been closed for the winter so there were no other people present at this time. Overall the evening was uneventful, and "no major evidence" was gathered. However it is a unique, and interesting place, with much atmosphere.

Random photos taken during the OGHRS visit. These are shared to give the reader an idea of the layout, and appearance of the building. We do not believe there is anything paranormal to be found within these images. All photos courtesy Tere. 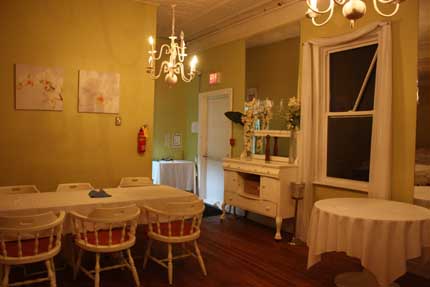 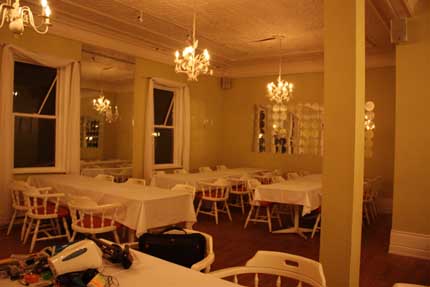 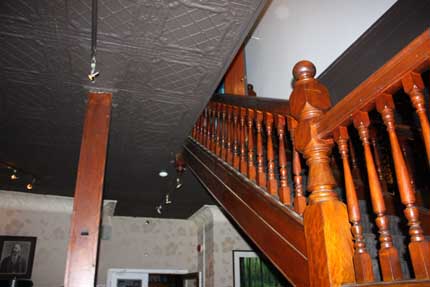 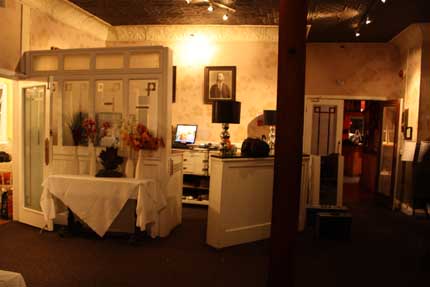 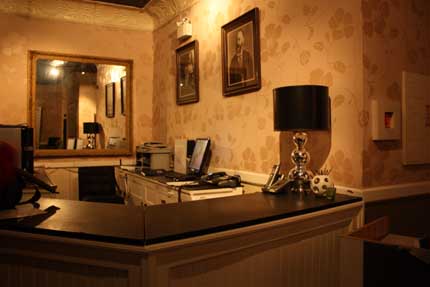 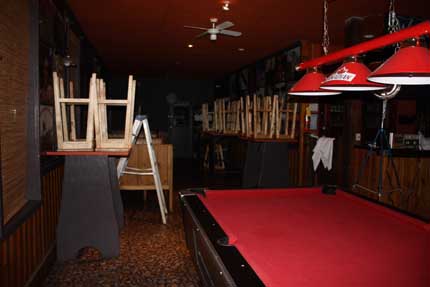 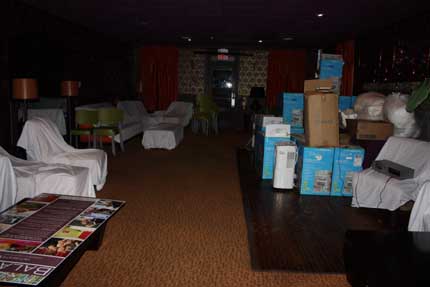 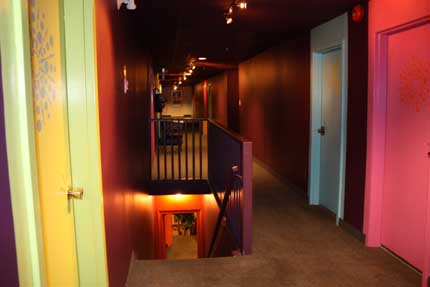 PLEASE NOTE: This is a site devoted to cataloguing ghost stories from across Ontario and is not related to or run by the Bala Bay Inn itself. If you wish information about this wonderful hotel please contact them directly.

Our thanks to the kindness and generosity of the Bala Bay Inn for allowing us to visit and to Dave Newman and Brian T James of FM 105.5 radio for thinking of us.  If you can add to this report or have experienced something ghostly while at Bala Bay Inn please do contact us via This email address is being protected from spambots. You need JavaScript enabled to view it.. We'd love to hear from you!

In early September 2013 we received the following witness account from a guest at Bala Bay Inn:

"My daughter and I were guests at the Bala Bay Inn.  My daughter was in the shower, I was in our second-floor room folding and repacking our suitcases as we were leaving in the morning.  I heard a noise, and looked up.  One of the large ceiling towers was elevated, and a man was looking into the room.  When the man noticed me looking at him, he gently set the tile down. I went into the bathroom, and I asked my daughter to quickly put on a towel as there was a man in the ceiling of the room.  I went back into the room, and called the front desk.  I instructed them to call the police.  Two men and the lady from the front desk arrived at my room within seconds.  They had a ladder and flashlights, and immediately removed ceiling tiles to look for the man.  The ceiling is a suspended ceiling, so it would not have been able to support the weight of a man.  There was no dust disturbed on the top side of the tiles.

So, we determined it was a ghost.  Before my daughter and I went to sleep, I put a piece of black fabric under the tiles the man had lifted to look into the room.  In the morning, the black fabric was covered with debris from in the ceiling!

About two weeks after I arrived home from my trip, I researched ghosts of the Bala Bay Inn.  I found your site, and the picture of Sutton.  His was the face I saw peeking into the room."

In further correspondence the witness shares:

"The strange thing is, the only dark ceiling tile in the room was the one Sutton lifted to peek into the room.  The tile was removed completely by the staff, so there were no ropes attached, or handles on the tile one could have used to pick it up.  The was no central heating or cooling system in the room either.

I didn’t feel threatened, only a curiosity from Sutton."

Our thanks goes out to the witness and her daughter for sharing the above information with us.

"My friends and I attended the Bala Bay Inn late September 6, 2013 to set up for our niece's wedding on September 7, 2013. We were assigned a room on the third floor.

Somewhere between the hours of 2am and 4:30 am, I heard a clicking sound (something metallic like the tap of a hollow metal item) several times in our room, often alternating near the bathroom door (faint) and then right by my left side (very prominent) while lying and attempting to fall asleep.

I woke my friend up the first time and she said she did not hear anything, but could not sleep. We then went to sleep again and then shortly after, the taps began again, in the same fashion as the first. I then woke up my friend and asked her to turn on the light. I then proceeded to the washroom to open the shower curtains and then left the light on the in the bathroom and then turned off the main room light.

While lying there, I could very distinctly see the side profile shadow of a round head and nose. I did not feel scared or threatened in any way. I knew there was something in our room. I then started to fall sleep and then felt three very gently strokes (on arm, thigh and calf). It awoke me, but I was able to fall asleep again. This happened during the course of two days.

The morning of the wedding, I asked the staff if they personally had any experiences and they said little signs here and there and that the owner had died in 319. They then pointed to the picture over the front desk. This was the exact profile image on my room door the night before. I took various photos (some within seconds of each other) both during and after the wedding,  it was not until I got home that I realized there were orbs in some of the pictures, but only the pictures at the entrance to the lounge. The following morning after the wedding, the fire alarm went off. Some suspect that someone tripped the alarm and others say that someone started smoking in their room, but no sprinklers went off. On September 9, 2013, my friend messaged me to say that around 330am on the 8th. she and her husband were lying on their bed in their room and the bed had jumped.

All I can say that it was a gentle non-threatening presence. I firmly believe that contact was made with me. I have no question in my mind."

Our thanks and appreciation go out to the witness for sharing this experience with us. Have you had a similar experience at Bala Bay Inn, can you add further information to this report? If so please contact us at This email address is being protected from spambots. You need JavaScript enabled to view it. Your privacy will be protected and confidentiality is assured.

A reader writes in:

"It was at the Bala Bay Inn on the long weekend in May of 1998.  We were staying there to attend a Blue Rodeo concert at the Kee to Bala that was occurring on the Saturday and Sunday night.  My sister and I came in around 12:00 on Saturday afternoon.  I had just arrived from a flight from California and was tired so when we arrived we decided to have a nap before the evenings festivities.  We got settled into the room and placed a cooler,with beverages and ice on the "credenza" in the corner of the room.  I do not recall the room number but it was right at the top of the steps on the 2nd floor.  The room consisted of two single beds and a very large bathroom area.  We fell fast asleep immediately and had been sleeping for about 1.5 hours and were in a deep sleep when at 2:15 p.m. we were both startled awake by a large crash.  We were startled to see that the cooler had been flipped upside down, off the credenza with drinks and ice everywhere over the floor. It was up there very securely, was not hanging over the edge. We got up and looked to see if the window was open to see if it had somehow blown it off, which it wasn't, and besides, the cooler was very heavy and wind could NOT have knocked it off.  We were stumped but didn't give it much more thought, until the next day.  We had been enjoying drinks on the patio outside on this lovely long weekend with some childhood friends that had come meet us and whom we hadn't seen in years.  With these friends, were some young acquaintances of theirs, who had been camping for the weekend and had come with them to meet us for drinks. One of the young fellows with our friend Jamie, (a local), mentioned that he needed a shower and we offered to let him use our room to go clean up as long as he had his own towels.  Well, he proceeded to shower and was getting out of the shower when he heard a large crash from the bedroom area, and came out and now saw that my sister's suitcase, which had now been placed on the same credenza as the cooler, was now flipped upside down, with clothes everywhere.  He quickly put it back up and put the clothes back in, all the while thinking that WE were going to think he had been rummaging through the clothes.  The time was exactly 2:15, the same time as the day before.  He came down and proceeded to tell us what had happened and we started freaking out telling all at the table what had transpired the day before.  It was THEN, that the locals told us not to worry, that it was just the former owner of the hotel messing with us, wanting a drink (out of the cooler) and was  messing with the poor young gentleman whom we had trusted, wholeheartedly, with our belongings.  I was absolutely terrified for the rest of the weekend and had to spend one more night there and honestly completely spooked for the remainder of our time. We had absolutely NO details on the history of this hotel until being told.  We were then told many many stories of different things that had transpired, by the staff.  I truly believe that we were visited by someone. There are many well documented cases of strange happenings at the Bala Bay Inn."

Our thanks and appreciation go out to the witness for sharing this experience with us. Have you had a similar experience, can you add further information to this report? If so please contact us at This email address is being protected from spambots. You need JavaScript enabled to view it. Your privacy will be protected and confidentiality is assured.