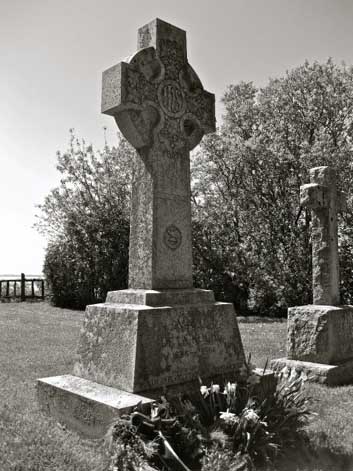 Does the ghost of Canadian author Stephen Leacock frequent the churchyard in Sibbald's Point where he is laid to rest? Many residents of the Town of Georgina believe that, yes, perhaps the mysterious lights and figures which appear in St. George's Church cemetery are associated with his ghostly presence. Others are not so sure...

"I saw a figure which seemed to be that of a man, but I couldn't make out a face or anything," said one witness who confessed to being present just outside the churchyard after curfew on one occasion. "It was a definite figure who seemed to be hanging around just outside the area where Stephen Leacock is buried," she said. "Maybe it was him." The witness, a girl in her late teens who lives in the immediate area, said that there have always been rumours that the graveyard was haunted, but that she never really believed it until she "saw it up close."

Another witness, an older woman who happened to be walking by the cemetery one early morning, swears she heard what sounded like a male voice "talking very softly to no one in particular" and, upon closer examination, saw what appeared to her to be a man who "just disappeared" as she was looking at him. This same witness mentioned that as a youngster she was told about "strange lights" which apparently always appeared in the cemetery at night. "It scared me, but I never really believed the rumours about hauntings were true. But when I saw that man just disappear, well, I guess maybe now I believe in it all a little bit more."

Some residents in the area believe that the "mystery man" in the cemetery is either nothing more than a groundskeeper or an overactive imagination. Some believe it may indeed be a spirit, but not necessarily that of Stephen Leacock himself.

"It's an old cemetery!", said an elderly resident of the area. "I wouldn't be surprised if the place is swarming with old ghosts!" 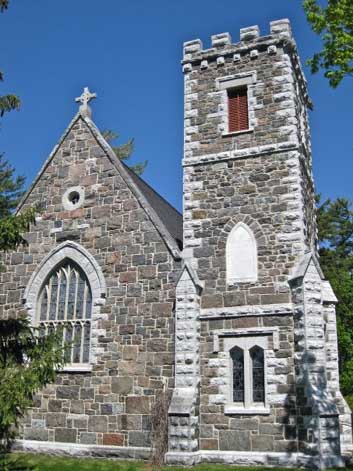 One of our readers sent in the following...

I currently live in Germany, but I used to live in Jacksons Point as a child and was familiar with St. George's as my grandfather was the groundskeeper for the property until he passed away.

Many of my summers were spent running around the cemetery bothering his workers and looking at the gravestones.

I remember one particular time when I was at the far west end of the cemetery playing around when I saw a man dressed in dark colored clothing slowly walking into the bushes which were north towards the lake. After a few minutes I went to follow him but there was no sign of him. I don't know how he could have disappeared as the cemetery is located on a rather steep > > bank overlooking the lake. Looking back now I remember it being a real hot day and I think it was just after lunch and this man was dressed far too warm for the weather.

My grandfather often was called to the cemetery to investigate strange things that took place in the night reported by the women next door who I think worked for Sibbalds Park. Sometimes he would have to return later in the evening when it was dark to finish a job and he often saw the stange lights. I also recall a few times when his watch that he left in his truck would change times during the day while he was working.

I hope this provides a little more into what goes on in St. George's Cemetery.

Do you your own story about the cemetery? Perhaps another sighting of Stephen Leacock or just another story in the area? Contact us at This email address is being protected from spambots. You need JavaScript enabled to view it.