This is a recent submission to the site from on of our readers...

In February of 1991 (If I remember correctly) I moved into my first apartment in Brantford. It was a small apartment, consisting of two "largish" rooms and a tiny bathroom. It was small, yes, but it was my very first home of my own, and of course, it was the first place I had ever lived where I also co-existed with what I consider a "friendly ghost".

This apartment was located on Park Ave in Brantford. It was a great little place, and I was really settling in nicely.

The first night I was there I had the first experience. My bathroom door was going to be kept closed, not only for "aesthetic" reasons (I didn't want to have people come in and just see the bathroom) and for practical purposes (otherwise I couldn't fit all my friends in my little living room). Well, that night I had a few friends over and we experienced the "Phantom of the Lavatory" (sung with the appropriate Andrew Lloyd Webber tune)... the door, even though it was closed, kept banging against the frame, as if someone was holding onto the knob and trying to open the door without turning it.

This was a daily happening, and I just dismissed it as the house settling (it was an older house, after all...perhaps about 60-80 years old). Then even stranger things started happening.

About 5-10 minutes before I would receive unexpected company, I would hear three light knocks on the front door. I dismissed it as neighbourhood kids, until it started happening at night. Like, late at night... I would have friends drop by after they got off work around 11 or so... it didn't happen all the time, but it certainly happened enough.

One weekend I had a friend of mine from Simcoe stay at my place, and we decided that we would have a horror movie night. What was the first thing that popped into our head? The Shining. So, we made a pile of popcorn, shut off all the lights, cleaned up the kitchenette (which was visible from my corner of the couch in the other room), and hunkered down for a creepy movie. We were really getting into the part where Jack is chasing Wendy with the axe when all of a sudden there was a huge crash that came from the kitchen.

We jumped (seemingly about 5 feet in the air) and paused the movie. Now, looking at it from a logical standpoint, the kitchen was clean and organized, the dishes put away, and there were no mice or any possible creatures that could cause such a loud noise. All of my neighbours except for one (on the third floor) were out that night. The crash literally sounded like someone had thrown pots and pans at the wall in the kitchen, which is where it came from, quite clearly... my upstairs neighbour's kitchen was right above the living room, so if anyone had dropped pots it would have sounded definitely as if it came from above us... and the neighbour I shared the floor with was out partying (as she tended to do on Fridays) and her kitchen was near the back of the house. We ran to the light switch, (with Jack Torrance still vivid in our minds) and turned on the kitchen light.

Nothing. I looked under the counter where I kept my pots and pans...nothing was moved or disturbed in any way, or looking like it had shifted. It was at that point that I actually started taking the thought of a spirit in the house seriously. We didn't watch the last bit of the movie until 2 hours later, when we had calmed down.

My friend from Simcoe would usually stay over on weekends after she got off work, and one particular night I had to work, so she decided to take a nap that evening, as she was tired from dealing with her place of employment that week. She told me later that five minutes before I got home, there was a distinct knocking at the front door. She got up out of a deep sleep, and automatically went to the door and opened it. There was nobody there. She said that it sounded like the door was being knocked on the inside, rather than out, and she shook her head and closed the door. She laid back down and thought about going back to sleep (I had no idea what time I would be home from work; I was employed at a theatre) and not two seconds after she got comfortable, the knocking started, more insistently this time. When I actually got through the door, she was wide-eyed and white as a sheet. This is when she told me what happened.

My upstairs neighbour would often tell me she heard the "Ghost on the Stairs". There was a blocked off staircase between her second-floor apartment and the other apartment on the first floor on which at night she would hear somebody trying to climb very quietly, as if not to wake anyone. Nobody had access to those stairs but her and her husband, and they would be in bed when this would happen. She just commented that she was glad that the Ghost was trying to be considerate.

I had other incidents happen, like the TV turning off and on (especially when I was trying to talk on the phone, distracting me from my conversation), but then two friends of mine experienced the next weird thing in the house.

I was trying to set up these two friends, so I thought, what better way to get them more acquainted than to have them both at my house one night? My male friend lived about five blocks away, and my female friend lived in Burlington. They both lived with their parents. On that particular night, I was very tired for some reason, busy day or something like that. I laid down on the couch, and fell asleep while the two of them were talking. Rude, yes, but it seemed I couldn't help it. I guess it gave them their privacy too. So, with some calm music (I think it was classical that night) playing, my friends decided to take their conversation into the other room so as not to wake me.

The cd ended about 30 minutes after I went to sleep. They talked for another 2 hours or so, and then they started to... "get better acquainted". The stereo was still on, although not playing at all, just showing the power. I had never had a problem with power surges or anything, and there was no feasible explanation as to why the next event happened.

Just as they were getting intimate on the couch in the other room, the cd started playing, LOUDER than we had been playing it before. It scared the bejesus out of the both of them, and my male friend came quickly into where I was sleeping (and where the stereo was) because he thought they had woken me up. Well, there I was, 'dead' to the world, in the same position that they had left me on the couch. Apparently I hadn't moved an inch.They stopped their cavorting and went to sleep after that, very quickly. My male friend told me the whole story after my female friend had left, and with him being quite psychically in tune, we tried to figure out a RATIONAL explanation. The only one *I* could come up with was that my "ghost" was trying to remind my friends of their manners in someone else's house.

Until I moved out two years later, there were strange little things that would happen...when I bought my first camera, my friend from Simcoe bought one from the same place as I did...so we decided to try out the cameras by taking pointless photos of the apartment. I took a picture of a stuffed spider that was hanging on my door...but when the picture was developed, there was an eerie white light that blocked out the pattern of the wallpaper behind it. 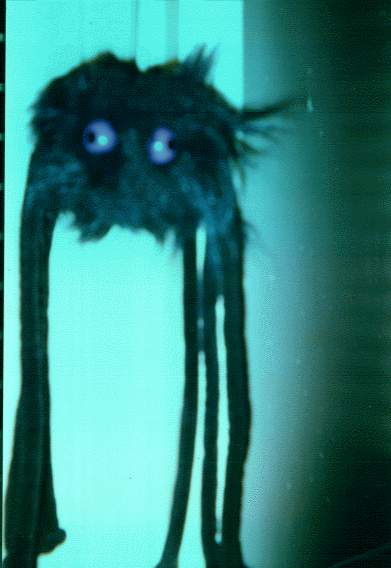 There was no weird light in the place when we took those pictures, and none of the other photos had any other anomalies in them. Just that one. The image was also blurry (at least the spider was) but the rest that was visible aside from the light was pretty clear. I was sober, not smoking, and it was at about 4pm in the afternoon. My apartment faced east. We chocked it up to the Ghost.

Well, I hope that this has been an enjoyable set of stories...I think I still have a couple more to tell you about this particular apartment, but again, I have to go.

If you wish to respond to the author of this story or to maybe tell us of a similar situation, please contact us. This email address is being protected from spambots. You need JavaScript enabled to view it.