The 'Last' Orb Phenomenon Document from Us - December 2004 Update

Well, I am certainly not immune as proven time and time again... and although I can't give out too much, a joint project between ourselves and ParaResearchers is in the works... and it's about our least favourite issue, orbs.

Now, our original article on "orbs" stands as it is, but for those MANY that still feel there's something more than close-up particles of dust, dander... whatever near the lens and caught in the flash, along comes an idea from Dr. Charles Lietzau who is/was also looking into orbs...

Dr. Lietzau is also of a mind of our theories (in fact, in his latest paper that contained this new concept, he does reference our article as a source for his work,) that the phenomenon is not much more than a natural occurrence being blown out of proportion by those who, for whatever reason, need to believe without much real evidence, but still did a large experimentation and took a huge amount of test photos using a piece of equipment that should have not only occurred to me, but to the elusive housemate who initially triggered our own "Eureka!" about flashes, lens distance and airborne particles... why the old housemate? Well, he actually has played (for fun and artistic reasons) with the equipment that might help people discover more about photographic orbs...

The equipment? A stereo camera.

Stereo cameras are "normal" film cameras with two lenses and (usually) a single flash. The lenses and ergo: The exposures, are slightly offset so that when viewed through certain special "viewers", make the image seem three-dimensional. 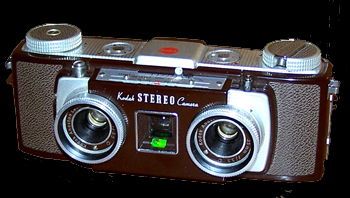 Now, that's pretty cool, but the 3-D effect is not what makes this piece of equipment so valuable to "ghost enthusiasts", especially orb-hounds.

You see, with TWO lenses and TWO exposures taken at only slightly different angles but at precisely the same time would negate some (most) airborne particles reflecting a flash.

The concept is, if one frame shows an orb and it's only an illuminated particle, the other lens either should not see the particle at all, or show it with a relatively distinct change in it's brightness.

Now, this tool would not be infallible. In fact, if a large particle was... say... three two five centimeters from the lenses, dead center, and was capture by the flash, then it MIGHT appear as a "real orb" of equal appearance in the photo. The chances, however, in this happening are somewhere between slender and none... Not impossible, but highly improbable.

Now, we have seen situations where investigators were already on this right track, but not to the same degree of preciseness. Many have mounted multiple cameras on a tripod or other contraption and attempted (sometimes successfully) to take images at the exact same moment using all the cameras. Now, this is okay, but a stereo camera, used properly, would eliminate possible time-changes during the exposures and also, if there was/is a film defect or processing problem, it would negate this too as the two images would show the problems a little better to even the untrained eye.

Now, the REALLY nice bit about this is that stereo cameras run about $120 Canadian if you shop around so this is not a heavy-duty expensive toy.

So, in my guesstimation, if you have a stereo camera (film please... need those negatives and to be able to back-track the chemical processing) that snaps an orb on BOTH frames that appear identical and that orb IS obviously obstructed by another object (not another orb, but a chair or something like that...), then you either have a photo of a genuine anomaly or an impressive hoax.

There's MUCH more to come on this... but it will take some time... We're still slugging away with Dr. Lietzau's paper and getting ready to discuss this with our own resident experts... but it's coming!

Either way, if you're a believer in orb photos, or even a big-time ghost enthusiast, a stereo camera may not be a bad purchase for the here and now.

Comments? Critique? Kudos? Send comments to This email address is being protected from spambots. You need JavaScript enabled to view it. and please mention that this is about the Final Orb article. Also, PLEASE do not send orb or mist photos unless they meet the above mentioned criteria.