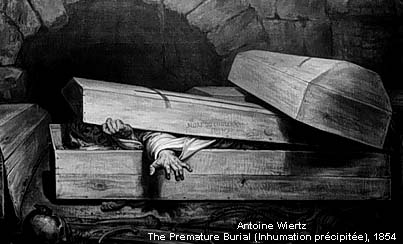 The following e-mail to me came in from our own researcher, Tere, who gave me the following thoughts... (It has been edited slightly)...

The Bedside Book of Death by Robert Wilkins
Cemetery Stories : Haunted Graveyards, Embalming Secrets and the Life of a Corpse After Death by Katherine M. Ramsland
The Victorian Celebration of Death by James Stevens Curl
Death and the Afterlife: A Cultural Encyclopedia by Richard P. Taylor
Buried Alive: The Terrifying History of Our Most Primal Fear by Jan Bondeson
Corpses, Coffins and Crypts : A History of Burial by Penny Colman
The Vampires Bedside Companion by Peter Underwood
Ghosts, Ghouls & Other Horrors by Bernhardt J Hurwood
All these books are either available via Amazon.Com or Indigo.Ca or your local library.