One of Ontario's best known and best preserved forts is Fort Wellington in Prescott. Currently (2001) the fort is set out for visitors as it was in the 1840's.

Since the late 1700's, a fortification has stood here guarding the mouth of the St. Lawrence River and what makes this particular British fort so interesting is that unlike Fort York in Toronto, George in Niagara-on-the-Lake and Erie in Fort Erie, Fort Wellington has never been attacked.*


* - Fort Henry was not attacked by land but was subjected at least once to a sea bombardment and the present fort in Kingston is not from the War of 1812 era either.


The fort sits very much as it did over a century ago and is home to a ghost of it's own. Oddly enough, it's not the ghost of an English or Canadian soldier that fell during the Battle of the Windmill nearby in 1838 or even that of an "American Hunter" or Canadian rebel but apparently a lost soldier from the War of 1812. Even more interesting is that this fellow, who'd be used to a single-story blockhouse (in 1812, the blockhouse was only a one story building,) made his presence felt on the second story of the restored 1840's blockhouse which features three floors.

Some staff had reported a "freaky feeling" in the blockhouse and the odd "weird event" occurred (things being moved or shuffled about seemingly on their own volition,) but not too long ago, a visiting re-enactor/interpreter was alone on the second floor of the blockhouse when the old soldier made his presence known.

According to three separate sources, the soldier came out of a corner that is the normal location for some brooms and introduced himself as Terrence Anderson (the spelling of this name could be VERY wrong,) and informed the interpreter of his rank and regiment and of the fact he was from the conflict of 1812. He apparently made his appearance to voice approval of the fife practice that this fellow was performing. What happened after this initial encounter, we can't say for sure but we are looking into it.

Whether "Terrence" is really the only ghost or not, he will bang and slam doors occasionally during "fife" sessions in the blockhouse and we have been told that some staff members will not happily venture near the brooms in the evening.

Don't let this possible haunt dissuade you. The staff is courteous and friendly and will discuss "Terrence" if asked nicely although it (he) is certainly not part of the tour. The fort is easily the "cutest" fort in Ontario consisting of the normal palisades, the three story blockhouse, the officers quarters (approximately 1/8th the size of the officer's quarters at Fort George or York,) and the "privy". There is the ever popular tunnel that is open for visits during the day that leads to a sheltered firing room for men to fire on the enemy caught in the earthworks. Best of all for families, Fort Wellington has a "play fort" for young children with dolls made up as soldiers and stuffed muskets on the third floor of the blockhouse.

If you find yourself in the area (and for ghost enthusiasts, it's a good area to be in,) take in the ghost tours of Kingston or Brockville and do stop in with your whole family to see the Royal Canadian Rifle's at Fort Wellington. You won't be sorry you did as it is one of our favourite forts. 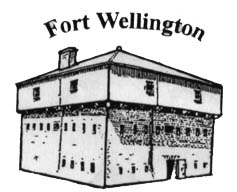