Some ghosts are not of our species, that is, if you are human! There have been all kinds of reports of ghostly dogs and cats, but Toronto can also boast of its poltergeist-like horses!

At night, the sound of ghostly horses' hooves can be heard clopping down the streets near Clarence Square. One report is that the horses belonged to a Colonel who shot them in 1814 and buried them below the current streets.

Editor's Note: The horses in question are more likely (actually, it's safe to say that they "are") buried at the First Garrison Burial Ground on what is now called "Victoria Memorial Park" (or sometimes called "Victoria Square") at Portland and Niagara Streets just North-East of the Fort. This park was a large burial ground (cemtery) and houses many of the dead during the war. During the height of the war in Niagara, when york was a "hospital stop" for most men, the then Rev. John Strachan relates through his notes that he was burying up to eight men per day in this land. 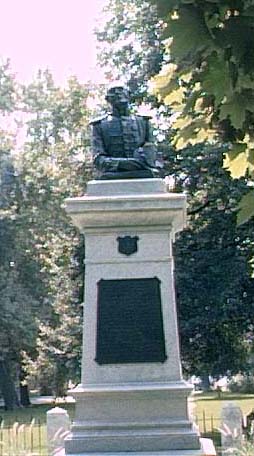 Photo of Memorial in Victoria Square by Editor