In the community of Moore Falls on a stretch of the Lutterworth road, there is a legend that grew out of a murder that occurred on the road of a man who's brother-in-law over the ownership of a trap line.

The road quickly gained a reputation that came to a bizarre head when in the 1920s, a group of lumber workers were driving along the road at night when their headlights caught not the spectre of a man but a ghostly woman in a flowing white gown that was described even in the twenties as "old fashioned". The woman "disappeared" from view as quickly as she was spotted.

On Highway #35 near the Kilcoo Camp area there seem to be two intertwined stories of death and murder and one may be true, the other not but that's the way it spins in folklore.

Aside from the story above, apparently (sometime before 1920 but the dates will be entered here once we've managed to track down the validity), a gent named Lou Porter had a sister who married another fellow named Hector Elliott.

Lou was looking after his sister while, we assume, Hector was away on business and Lou's sister was pregnant. She ended up going into labour during Hector's absence and it was particularly bad and she passed away during the birth with a doctor arriving to late to save her life.

Although it's all (right now) conjecture, it has been said that Hector blamed Lou for not getting his wife to proper medical attention and shot him dead.

Lou received his wounds not far from the road and was left for dead. His body was not found for several days.

Is it possible that Lou's sister is the spectre that is seen? It certainly makes more sense as the apparition is a woman rather than a man but who knows... with legends and folklore, things may not always be what they seem.

We were delighted to receive an email from one of our readers that included a copy of the microfilm image of Lou Porter's  death certificate, obtained via Ancestry.ca 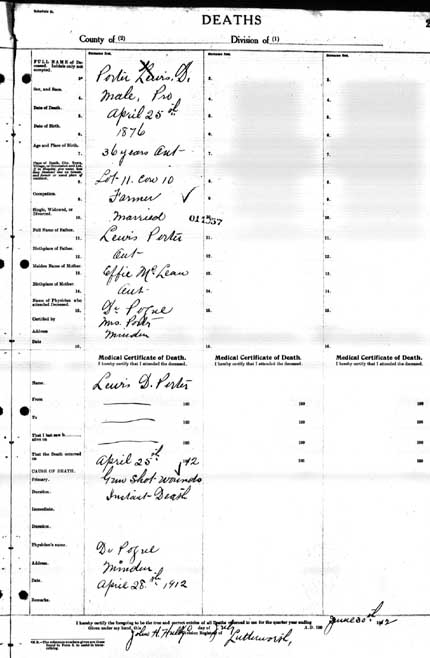 We were also directed to this well researched our article on the Martha Perkins murder (please click on link to read it) that sorts out the fact from the fiction in regards to this story.

Have you visited this road? Do you have another ghost story or report from around Moore Falls? Please contact us at This email address is being protected from spambots. You need JavaScript enabled to view it.