UPDATE: August 2002 Thanks to a reader named Brenda Russell, we invite you to have a look at Fort Wellington from a bird's eye view! 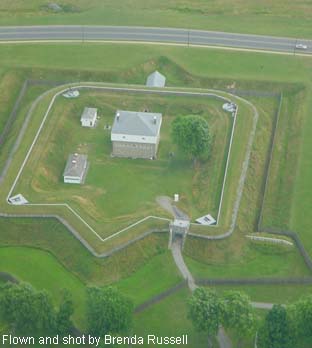 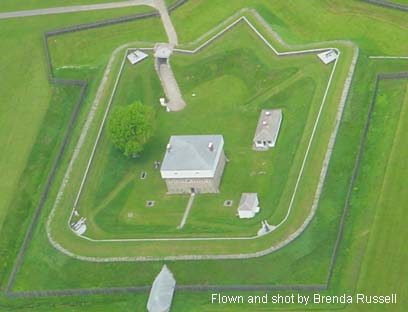 Update: November 2003 The following update was sent in to us from one of our readers...

During the 1980s, I worked at Fort Wellington. During that time, I experienced many unusual events with several other staff members of the Fort.

I will recount some of the experiences I had.

Because of its location and the height of the earthworks, the interior of Fort Wellington is very dark at night. During the month of December each year, we used to open the Fort on weekends for "Christmas tours". The barracks would be decorated and hot apple cider prepared in a fire pit which is located immediately to the east of the blockhouse.

One evening in the early 1980s, I and two other staff members were lighting the fire to warm the cider. The gate to the Fort was closed to avoid the public wandering in before opening time, and the door to the blockhouse was still locked. While we were standing by the fire, we saw a single individual walk in the gate and around the far side of the blockhouse.

Thinking that this was another fellow we worked with coming to open the blockhouse door, myself and one of the other two gentlemen I was with walked around to the blockhouse door, which is on the south side of that building. No one was there. We walked back to where the other of my coworkers was waiting by the fireplace, and he confirmed that he had not noticed the unidentified person leave or go anywhere else in the Fort. Later, the person we thought was the chap that apparently disappeared did show up and confirmed that neither he nor anyone else of whom he was aware had entered the Fort.

I should note that although we saw that person walking in, we did not hear anything. There was no speech or sound of walking in the snow.

There is another story from around the mid-1980s. After the Labour Day weekend and until Thanksgiving each year, the Fort's on site staff would be reduced to one or two guides. This was a lonely job since attendance fell to the single figures each day. After school one day, I went to the Fort and one of the fellows I worked with was the on site guide. He was sitting in the kitchen of the officer's quarters sewing. We spoke for some time, and then he asked me to go into the blockhouse and rewind some 16 mm films in the blockhouse's modern theatre (east half of second floor).

I went upstairs and rewound the films. At the time, there was a small white cat which hung around the Fort and he was sitting in the projection room with me. All of a sudden, he went stiff and ran off very quickly. This discomfited me and I decided to go down to where the other fellow was sitting and ask him to help me inspect the blockhouse for intruders. When I entered the barrack room (west half of the second floor), the cat was sitting with its fur standing on end and hissing at the southwest corner of the barrack room. I was watching the cat while I walked towards it, but out of the corner of my eye I saw something moving in the corner the cat was hissing at. Already frightened, I ran out of the building at top speed with the cat right behind me.

The fifing story was relayed to me by the fellow that experienced it first hand. In about 1980 or 1981, the fellow was sitting in the same barracks room playing the fife. While playing, he suddenly had the sense of an entity moving towards him and laughing at him. According to 'the witness', the entity did not introduce himself as Terrence. Indeed, I do not think Terrence has ever introduced himself to anyone that way.

The door alarm story was also told to me first hand from the witness himself. Part of the firearms display in the blockhouse was stolen in about 1982. A door and motion alarm system was installed in the blockhouse because the 1982 thief had entered and left the building through a window on the second floor. During the winter, few people ever visited the blockhouse and it stood empty for weeks at a time. On the third floor, a projecting wooden gallery stood away from the stone wall to a distance of about three feet. The floorboards lifted up to permit soldiers to fire down at the base of the building's wall. This gallery is accessible through eight doors, two of which are on each side of the large open room which is the third floor. During the winter, these doors were sealed shut to prevent wind from blowing through into the interior of the building.

On one occasion the alarm went off in the middle of one winter's night. The alarm company called one of the employees, who lived a few blocks away from the Fort. He went to the Fort, unlocked the gate and walked to the blockhouse door. He walked through the building, and saw nothing until he reached the third floor. Once he got there, he saw that all eight of the doors to the gallery had been opened, triggering the alarm. He closed them quickly and left.

The Terrence story came from a Ouija Board experiment conducted by five employees and myself in the mid 1980s. One chap brought in a Ouija board and we tried to talk to the spirits in the Fort. One spirit identified himself as "Terrence" and said that he had been at Fort Wellington during the War of 1812. He said that he had served with the 12th Regiment of Foot. I have always been sceptical about the veracity of the Terrence story since the blockhouse is a replacement building built in 1837 and 1838 and because the 12th Regiment never served in Canada during the War of 1812.


Do you have an experience at Fort Wellington? Maybe you have some insight into "Terrence Anderson"? Please e-mail us at This email address is being protected from spambots. You need JavaScript enabled to view it. and tell us.