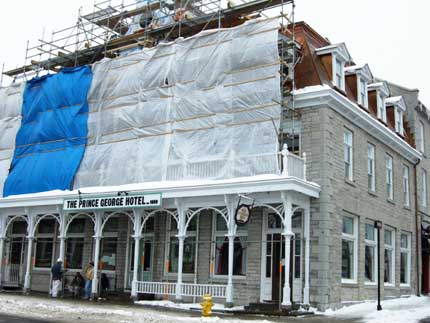 After dinner during Christmas break, I went with a group of friends for a drink in the Tir na n'Og pub located in the historic Prince George Hotel (200 Ontario St) in Kingston. After being there for a few minutes, I excused myself from our table to take a look around.

Within the Prince George Hotel first floor, there are three distinct pub/lounges: the Tir na n'Og (authentic Irish Pub), The Speckled Hen (English Pub), and Monte's (an upscale Martini Lounge). After viewing the beautiful antique/vintage decorative items, I started speaking to one of the staff members who then introduced me to a long time staff member of the Tir na n'Og.

This delightful lady had many stories to tell about the Prince George, and all of the "entities" within. She told me of the ghost of Lily who haunts not only the third floor, but the entire building. But the biggest entities that affect the Tir na n'Og are apparently two men who are malevolent. Quite a few of the staff has had experiences with the two men spirits... but they seem to favour the door staff. According to the staff that I spoke to, these individuals have experienced the feeling of being watched, and hearing something growling at them.

The most interesting story that I was told that night had to do with recent events in the hotel. For about a week before New Years Eve of 2003, candles in the Prince George Hotel started lighting themselves according to staff. The staff members talked to each other about it, saying that Lily must be trying to tell them something. On New Years Eve at 12:04 AM, the Prince George started to burn. The fire started on the third floor, and is still under investigation (therefore the staff can not comment on the cause or where specifically it started). Luckily, there were no serious injuries. The hotel is now closed until approximately April, 2004 for repairs. Was Lily trying to warn the staff, and save her long time home? We will never know for sure... but maybe in 100 years from now - we may get a hint. According to Tir na n'Og staff, the hotel has been almost destroyed by fire every 100 years (this fire that almost destroyed the hotel was 40 years early). The future staff of the Prince George will have to keep their eyes and ears open for clues from Lily to prevent future disaster.

This email address is being protected from spambots. You need JavaScript enabled to view it. - Field Researcher, Ontario Ghosts and Hauntings Society

Do you have anything to add or tell us about the Prince George? Please, e-mail our representative for the Kingston and Eastern Ontario This email address is being protected from spambots. You need JavaScript enabled to view it.