Please note that this business has requested complete anonymity, and no publicity generated by this report.

Staff member has weird feelings when walking through the kitchen into the main foyer. Staff does not like to go into basement where washrooms are located. One staff member will work late in the building and while she is alone she will hear footsteps and knocks and bangs knowing that she is a lone in the building. Same person also hears wind sounds through the building and whistling as if there is a wind storm but the night is calm. Another staff member has heard talking within the basement when nobody else was around. This person was alone in the building at the time. Computer issues have happened without explanation, in the mornings, they will not load properly except for one computer, all computers will also turn off without explanation. The woman's washroom seems to have issues with the plumbing without explanation. The basement gives out a weird feeling to anyone who enters down there.


Before the investigation, Penny (lead investigator) and a staff member were looking around, footsteps were heard upstairs when nobody else was in the building. The previous tenants also have had experiences according to the buildings owner.

A staff member was working on a machine when another staff member entered the room and saw a black shadow walk across the room on the opposite side of where the first staff member was working. She called out to her co-worker, but found that she was not anywhere near where the apparition was seen. The owner was down in the basement and had an uncomfortable feeling. The owner also felt as if they were being told to get out. In a stockroom, ten long fluorescent light bulbs were standing in the corner before all employees left, in the morning all were shattered on the floor. A former employee would refuse to enter the basement, they were fearful of it and would avoid to enter it at all costs, on one occasion they felt a touch on their back. An employee was working in the basement on a machine when he saw a gentleman standing behind him, it was a black shadow with no features, when he gave a second glance, the apparition disappeared. Another employee was working in the basement when he saw something that appeared to be a piece of paper fluttering erratically on the floor. He looked in the area and there was not a piece of paper around to be seen.


We cannot give out any historical details at this time as that would give out the location of these businesses.

A full-scale on-site investigation is being planned, and this page will be updated at that time. Our thanks to Bonnie, Penny, and all of the witnesses that have been interviewed.

Staff members and owners of both businesses and buildings were present and interviewed. Locations of possible anomalous events in both buildings were noted and monitored. Photos taken contained no anomalies, possible e.v.p's were analyzed and are inconclusive.

Due to the desire for complete anonymity by both businesses we are severely limited in our ability to report on our historical findings or include any photos as these would be identifying of the location involved.

Of interest and something we can share with our readers involved one of our consultant mediums.

During this investigation we decided to utilise the "gifts" of two spirit mediums. While we do not consider psychic information the front line of our investigations, we do recognize that it will occasionally compliment our own work.

We have known Nancy for a few years and she has assisted us in the past. Lynn I only met a few months ago (her credentials are impeccable) under a bit of odd circumstances. This was Lynn's first outing with our team.

It is important at this point to state that Nancy and Lynn had never met prior to our investigation of these businesses on Nov. 4th. We also made a conscious effort to keep them separated and rotated them between the two businesses. They were asked not to speak aloud of any impressions, and feelings they may receive either with each other or the other investigators until after we regrouped and were able to discuss these at the end of the evening. Each of them had a note pad to write down their own thoughts.

As we waited for the group to collect equipment Nancy pulled me aside and asked if I would like to have copies of her sketches that she had made a few days prior. These sketches were based on impressions she had received prior to actually stepping foot at the location. I have scanned one of her sketches and uploaded below. Please bear in mind Nancy does not claim to be an artist. 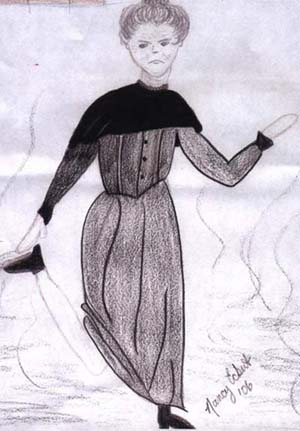 How odd I thought, that she sketched this woman hopping on one leg. I kept my thoughts to myself.

When we regrouped Lynn was asked to read from her notes and give us her impressions. To my shock she told us that she encountered an agitated spirit in the basement area of one of the businesses. Lynn thought it was very strange that this female "ghost" was jumping around in circles. Hopping!

My own jaw must have slightly dropped ... and that is when Nancy's sketch was revealed to the entire group including the owners of the businesses. I believe Lynn dropped her jaw at that as well! Nancy had sketched days before what she had just seen.

I must say that this is one of the most fantastic experiences I have personally had when working with spirit mediums! Thank you both!

Lynn and Nancy were also able to provide us with names. And this is where our historical researchers come into play.

All-in-all a fascinating investigation and we look forward to returning.

Our thanks to the building owners and business staff, Haunted Hamilton for private consultation and lending their expertise of the area, and our own volunteers!

Similar results to the second investigation of this, photos and e.v.p.s are inconclusive. Historical and psychical information cannot be included as they would definitely identify the building.

More staffers have come forward with their own experiences, poltergeist-like phenomena are still being reported and are on-going.

A future investigation is being planned, and will be reported on here.

Once again thank you to all those involved.