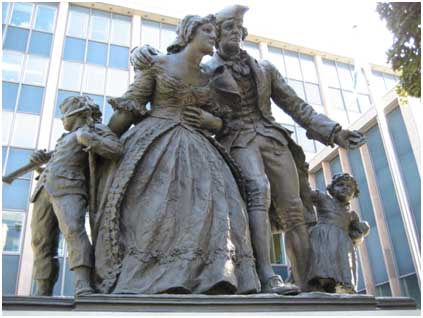 Photo Released into the public domain (by the author). Source.
Old Courthouse – former Wentworth County Courthouse  Currently a McMaster University Building
An interview with Maintenance Staff – February 18, 2010
Maintenance Worker: 13 years ago  the city had moved in and the office of the attorney general moved to another location – the courts were no longer being used as courts and the lock -ups were no longer being used as lock- ups. The police offices in the lower areas  were not being used  either.
I  was restringing blinds in the former court services offices area, (SW corner of the building). It was virtually empty  and was being used  to store some of the old furniture.  The tables were still there. This used to be the area  where the core services officers used to play cards and just generally hang out on breaks .  I  put the blinds on the table. I was restringing the blinds on the table because it was a large enough surface to  allow me to fully open the blinds.
At one point I got a call to go to another part of the building to do something else.  I left everything as is --  when I came back down the blinds were closed  (whereas when I left the room they were open).  I also noticed that they had been moved  around .
I had the key and the door was locked.  Nobody would have been there at that time.  My boss would have been the only other person with a key and he was nowhere near that area.

4th Floor  Old Courthouse–  My notes on staff discussion (maintenance worker along with 4 cleaning staff of the Old Courthouse and some former staff of Old City Hall, Hamilton)
Caretakers and  cleaners  often had feelings and had some visuals of unexplainable movement upstairs.  One woman was adamant about it. 4th floor was the old  judge’s chambers and court administration and there were about 8 judges up there with their own office and some smaller court rooms. Marriages were performed there.  At the time that the strange occurrences started being witnessed,  the area was no longer being used by the Office of the Attorney General .
A  cleaning woman who had worked there for 20 years  (had been there while it was being occupied as the Hamilton courthouse) had worked with another cleaner  who had been employed there even longer.. she had seen a  door open on its own and then shut back down.
On the 4th floor another cleaning lady witnessed  a flash of light and then saw someone in a large black gown walking around and fade out of sight.
Back in the the lower area where the cleaning staff would hang out during breaks (old court services offices area)  -- keys were often heard jingling.  Several staff could hear these keys jingling. There were no keys in the area or anything else that would closely resemble this very distinct sound. This would happen late at night when security would no longer be in the area. This key jingling sound would be heard on several occasions.
Area where maintenance worker claimed blinds were moved 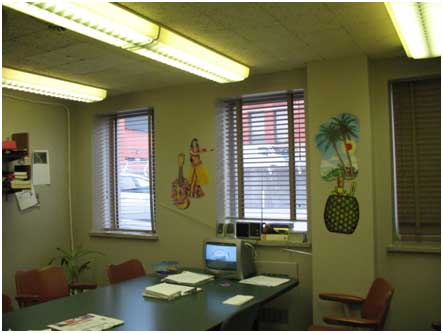 Pictures by Maria Grazia Cell area – no longer in use. Paul Bernardo was held here while he was awaiting for another transfer to jail outside of the area. 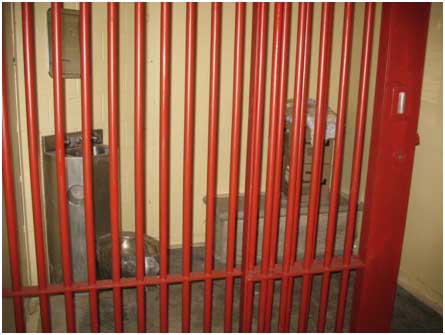 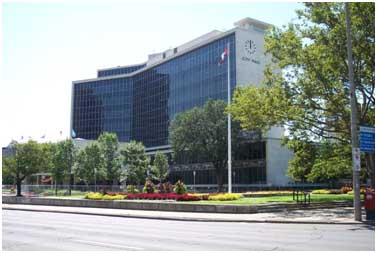 Hamilton City Hall Photo Released into the public domain (by the author). Source


City Hall, Hamilton – before construction and renovation – My notes from a discussion with cleaning staff of Old Courthouse who also had previously worked at City Hall
A cleaning lady who had previously worked at the city hall in Hamilton two years previous to her employment at the Old Courthouse  witnessed a male in a top hat and black coat at Hamilton City Hall. She witnessed a full apparition – she could see legs, arms and all other  details.  This same apparition was witnessed by another cleaning lady at the Old courthouse.  It was very similar. They wondered if it was the same person  appearing in two different locations or maybe just the clothing of that particular period.

In the United Nations room of Hamilton city hall, one of the cleaning ladies could sense what she felt to be ghostly activity very often. She would hear footsteps and people walking in and out of the areas she was cleaning. She would turn lights off, come back in the room shortly thereafter, and the lights would be back on.

In City Hall 6th floor  -- one day she was running water (in her janitor room)– (circa 5 – 6 years ago) she thought someone was talking . She shut the water off , said hello and nobody was there. On another occasion at night, she could hear what sounded like a conversation between a man and a woman. When she examined the area, nobody was there.   On another occasion, (the floor was empty) she witnessed door knobs moving and the sounds of doors clicking (once again when no one was on the floor).

If you have any further information or would like to share an experience of your own please contact us at This email address is being protected from spambots. You need JavaScript enabled to view it. Your privacy will be protected and confidentiality is assured.