In April 2012 we paid a visit to The Cawthra Estate in Mississauga.  Through the years we have received several inquiries about this location, and some former staffers have stated they believe the site may be haunted, mostly the top floor.

The history of the family is complex, there is a book on it written by one of them (Anthony Adamson) called "WASPS in the Attic".

A short look at the family:  The Cawthra family were the Astors of the Upper Canada in the early days. Joseph, the founder of the family in America was born in Yeadon Hall Guiseley, Yorkshire in 1759.

He emigrated with his wife and 9 children in the early days of York and opened first an apothecary and general merchandise shop. King George III granted Joseph a United Empire Loyalist 200 acres of land through Crown grants. He registered the land grant on July 6th, 1804 with the order and patent arriving 5 years later on Nov. 8, 1809.

The business flourished. The base of their fortune was made during the war of 1812.

Mrs. Cawthra-Elliot (last descendant) lived as a child at Yeadon Hall (College/ St. George). When this home was demolished the old bricks were brought to the new home (the Cawthra Estate in Mississauga) and a walled garden was constructed (you can still see parts of it today).

His son William was probably the richest person in Ontario at the time of his death in 1880. He was a financial genius, who concentrated on investments and charity work. He provided the funds for the mortgage for Toronto's first City Hall. When he died he was worth 3 million and left no will. A settlement was reached through courts with the majority of the inheritance going to his wife, the rest to his family who greatly benefited from the inheritance.

William's brothers John and his brother Jonathon went to war in 1812 at Detroit and Queenston under General Brock. John was the first MP from Simcoe County when it was separated from York.

John's youngest son Henry, a lawyer, monetarily also benefited from his Uncle William 's money. The money from the estate allowed Henry to quit his law practice to spend time with his family.

It was Henry's daughter's Grace that was the last descendant.  Grace Cawthra (the last descendant, today deceased,) married Major-General Elliot in 1921. She was in her early 40s. They had no children.  Their new home (the Cawthra Estate in Mississauga) is built in Georgian/Loyalist style in 1925 by renown architect William Lyon Summerville. Grace called the estate Cawthra - Lotten, this being derived from the fact that the lot of the house was number 10. She dies in October 22, 1974, at 96 years of age, leaving no will for her $2million inheritance. The City of Mississauga purchased the property which is today a conference centre.

A special thanks to Simona at Mississauga Heritage Foundation, and Steve Smiley for compiling the history. 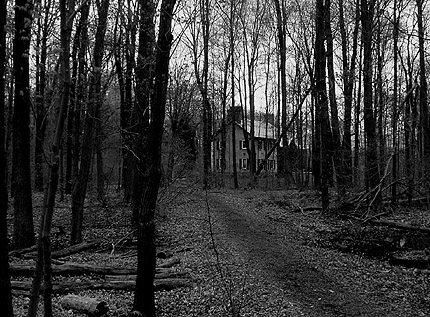 There is an excellent write-up on the web that discusses the topic of possible ghosts.

"Perhaps because of Bee's bold declaration that she would never die, the rumour has spread that her ghost haunts the Cawthra-Elliott estate. Pat Porter, who lived in the house after the Smouters moved out, said she felt Bee's presence strongest in the attic .

But if a ghost does roam the corridors of the Cawthra-Elliott house, chances are it is not simply the ghost of Grace. As Grace spent most of her life and certainly her final days looking at the world through the eyes of her ancestors , she became less an individual and more an embodiment of all of those ancestors. If a ghost does wail through the halls of Cawthra-Lotten in the pale moonlight, it is the ghost of every Cawthra that ever set foot on Canadian soil."

The quote above is from "Page Two"...

While we were at the location we noted nothing out of the norm, but we would definitely be interested in hearing from others who may have had what they believe is a ghostly experience at The Cawthra Estate. You may contact us directly at This email address is being protected from spambots. You need JavaScript enabled to view it. Your privacy will be protected and confidentiality is assured.