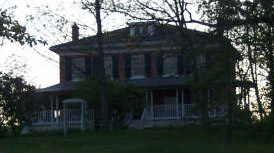 One of our readers sent in the following report...

While attending a War of 1812 re-enactment at the site my wife and my then 3 year old son along with a friend of my wife went in to the house to look at the artifacts and such. When they entered the kitchen my son pointed to a corner of the room and said "There's the boogey man." There was no one else in the kitchen area and my wife said it was quite eerie.

My son had not heard any of the talk regarding the house being haunted. So, was he just a little joker, did he say it because he was in an old house and he figured it fit the situation or are innocents more perceptive of paranormal activity?

Anyway, I am not here to judge just to relate an incident. Thank you."

We are planning on doing some more work within the site and, thanks to a previous visit, have had a chance to talk with some of the people involved with the site as well as other witnesses at the house.

We would appreciate any information or data anyone can share as well about the house or on any part of the Backus site in general. If you can help us out, please e-mail us at This email address is being protected from spambots. You need JavaScript enabled to view it. and let us know. Your security and confidentiality are our primary concern and we will maintain your anonymity if requested.


Update October 2006: One of our readers writes:

I live in this area. I personally have never been inside the house, but some of my friends have worked at Backus Mill during the summer. The house does give off an eerie feel.

I asked my friends if they ever came across any ghosts in the house, and every one of them, (that had worked there), had experienced something happen around them at one point or another. Some people had just heard doors opening and closing for no reason, or things move around in the house.

My one friend told me that there are certain rooms in the house where these things mainly happen. The only one that stuck in my head was the basement, where I think only staff can go. Supposedly things move around non-stop down there and there's always weird noises.

One friend was moving a few things around down there, and actually saw a ghost of a man/boy, and it scared him so much he just ran out of there, and will never go back in the house. As well other people have seen a ghost of a man or boy while down there. I don't know for sure if its a young man or what, all I know is it's a male.

When I read the page on this on the site, it brought back this memory of my asking about the house. I don't know how much is true but that's what I have been told. And the fact that some little boy saw a "man" and my friends say the ghost was a male, links a little too well to be a false story.

Our thanks to our reader for the above information and the use of their photo.