I never would have believed it if I hadn't seen it myself. My class of 20 ghost researchers were doing an on-site at Todmorden Mills on Oct 14, 2006.

It was one of four sites we visited that day, and because we were largely outside we didn't hold any hopes of finding anything. The day was overcast and cool, but not cold enough to see one's breath.

As we stood outside Helliwell House and listened to our tour guide talk about the known ghostly experiences of staff and visitors, I caught movement in the corner of my eye. One student who had a tri-field meter was sent over to do readings. About three feet from the corner of the building (again, outdoors) the meter went nuts. Lit up like a Christmas tree.

Another student turned and took a series of photos with his digital camera. In the first two photos there is nothing remarkable. Then there was this one. A faint mist appears over the researcher that is not caught on any photos previous or subsequent in the series.

I'm not a big believer in this mist/orb stuff, but this one...well I was there. My visual distraction in addition to the camera capture and the technical reading gave me a real sense that we "caught" something.

As we walked away (as a group) a shutter on an upstairs window crashed open.The color drained out of our tour guide's face and she told us that shutter was locked.Nobody had been in the building for at least 18 hours. She had locked the shutter herself.

Needless to say, it was a good day for the class!

Our thanks to the TDSB self interest course instructor and students for this submission. 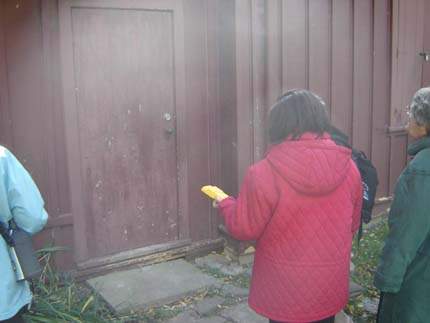 Further Findings: As a reminder, PSICAN groups do not accept mists, orbs, or vortex photos as evidence for the paranormal. In this case, we made the exception in order to show our research findings...

PSICAN and Torontoghosts with ParaResearchers has done extensive tests an research to look into EMF variances and instances of the paranormal and have found, despite the plethora of "ghost hunters" using them, no correlation whatsoever with perceived paranormal events and variances with ambient EM readings. Click here to read more.

Also, the photographer said that it was warm enough that they could not see their breath. Studying weather systems that day have proven that this was not the case... or at least, it is not at all likely the case.

According to Weather Underground which keeps accurate weather data every fifteen minutes for the GTA, that day had a mean temperature of six degrees celsius... or forty-four degrees Fahrenheit. It had also rained earlier in the day and there was a high humidity level in the air (alongside cool temperatures) and one also must note that Todmorden is in a valley... The Don Valley to be exact... which does tend to be cooler than the average in the city.

Ergo: Breath vapour cannot be ruled out as causation.

Although we have no doubt that the witness did not "see" breath vapour, it is possible that due to their movements and positions, they were not aware of it... but the camera "clicked" at just the "right" spot giving them the anomalous photo.