We received the following report from a reader about the old hospital.

The author was working as a security officer in the building after a well known College had taken control of the hospital. The author had heard all sorts of odd stories and rumours that they did not believe.

These stories included the rumour that shortly after three of the old buildings were renovated, a couple of students went to explore the tunnels that connected the buildings. After the students had been poking around some of the empty rooms, they went back towards the stairs and heard what sounded like someone whistling. The sound came from behind them, but when they turned around it stopped. As they reached the stairs leading up they heard it again, followed by a cold gust of wind.

Another story that got around involved one of the construction workers who was doing some work in the same tunnels. He was walking through the dim hallway when he rounded a corner and saw a woman walking ahead of him. He thought this was odd since it was late and there was nobody else around. the workman then noticed she was wearing a nurse's outfit. The workman called out to her, but she rounded the corner and disappeared. He followed and now saw her standing with her back to him at the far end of the hallway. There was no way she could moved that far in the time he had lost sight of her. He approached her cautiously and called out again. Slowly the woman turned around and faced him. The hapless workman was terrified to see that she had no face and only a flat blank area where one should have been.  He ran from the apparition and refused to go back into the tunnels.

The author took these stories as "made up to scare people", and had no reservations when he was posted to midnight shift at the renovated buildings.

The first few nights were uneventful, but he did find it to be very unnerving in some areas. (One of the buildings still has the old morgue in the basement which didn't add to the comfort of the author.)

On the third night, the author had locked all the buildings and set the alarm systems when he began to patrol the grounds. While walking by one of the buildings that he had locked earlier, the author thought he saw movement behind one of the windows. After shining a flashlight at the window he saw nothing out of the ordinary. If there was anyone inside, the motion sensors installed in the building would have been tripped off.

The author decided to check the building just to make sure there was no one inside. After turning off the alarm systems, he entered the building. Just before switching on the lights there was heard a loud noise that sounded something like a "whack". The lights came on and the author noted a plastic garbage can lid (the kind that flip around) going around and around as if someone had hit it hard.  He contacted the other guard who was stationed at the campus next door and informed him they had an intruder in one of the buildings. The author stayed on the radio with the other guard while they checked the building from top to bottom but found nothing. Every room was vacant and there was only a fire exit which would have sounded an alarm if used. The author checked the garbage can thinking maybe there was a mouse or something, but it was empty having been given a fresh bag from the cleaners.

The next day, the author was transferred back to the day shift much to his relief.

This report is almost verbatim what we received here at the TGHRS and has not yet been fully investigated. The author has wished to remain anonymous but if you wish to comment, add or possibly explain the events and wish the author to be notified, please send your mail to This email address is being protected from spambots. You need JavaScript enabled to view it. and we will forward them.

This is an update submitted from one of our readers...

I was in the Asylum at Lakeshore (Etobicoke), it gave me some very bad vibes, you kind of absorb a little of the fear and hate and anger and confusion that the old patients left behind like a residue. Anyone even slightly sensitive will tell you that, and add that you frequently feel like you're watched, or that any second you will "see" the place as it was. That is one creeeepy place. I remember mentioning that to someone working in the crew of a Police Academy movie, or something like that who was working down there and he said that there were all kinds of stories among the crew about weird hauntings there. There are old hospital beds everywhere, piled into corners of large rooms with high ceilings. The tunnels underground scare me from the outside, I feel that possibly something still uses them. That place gives you the same feeling as watching The Shining, it's just chilling.

What gives me the creeps is that the patients there were very disturbed and tortured while there (restraints, drugs, shock therapy, experiments). If there are a few patients still floating around, it's kinda scary that they are possibly insane ghosts instead of "normal" ones. I would seriously wonder about what walks those tunnels, they sort of grab your attention. And there are some very weird vibes in the wards.

Our "splash" image (or logo) with the children and the old building behind them was conceived by W. Mokrynski. Without knowing the history of the site as far as reported hauntings, the building he used is part of the psychiatric grounds. Not really THAT meaningful, just a neat coincidence that I thought I'd share.

Our sister site, Para-Researchers of Ontario have put up photos of the interior of one of the last buildings not yet renovated in the hospital. The report and photos are located by clicking here.

It should be noted, however, that certain stories have arisen about this hospital that are more likely than not absolute fiction. We have heard of patients being horribly abused and even terrible stories about morgues and crematoriums. After looking through the documents and reading reports in the archives from doctors, nurses and patients, they have pointed out that care there was the best one could get in the province and although some of the "treatments" were, by our modern standards, barbaric, for the time they were "cutting edge" and were administered with care and attention to the patients needs. As for "live people" being tossed into a crematorium, this seems to be total poppycock.

Also, we've noted that other more modern hospitals are now getting stigmatized with stories that mirror the ghostly goings on of the FLPH. We cannot say that these places are 100% ghost-empty but it does strike us that now two former mental institutions have apparently the same phenomena as this hospital. One wonders if people are getting a bit confused with which hospital has which story. 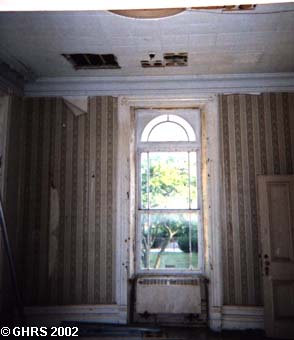 I attended Humber College for a year a while ago at the time the renovations were just in the early stages. In fact, I believe we were one of the first classes to be in the renovated buildings.

One time that stands out in particular was a day I was sitting at my locker in the basement. It was after classes and there were no other scheduled classes going on at the time and no one around to my knowledge. There were three exits from the basement, each sealed by fire doors: The central staircase and one external staircase at either end of the hallway/building. Each of the external staircases was sealed by fire doors on each level.

While doing my work, a young woman came through the fire door in the centre of the hallway, immediately turned and headed toward the door at the other end of the hallway. She had long brown hair and a long white, linen like dress and moving at a moderate to slow/steady pace. I didn't know her, had never seen her before at the school, and had a really weird feeling as she didn't acknowledge me at all and her attire just 'didn't fit'(referencing context as opposed to size). I immediately thought it might a 'visitor' and gave myself a mental shake-'stop being stupid', as she walked away from me. As she got to the doorway at the other end of the hallway, something compelled me to get up and follow her. The fire door closed loudly behind her as they do. When I entered the stair well, it was completely empty. At the speed she was going, she most certainly should have still been in the stairwell...and even if she had have gotten up the stairs to the second floor and gone through the door, I should have been able to hear it.

It was one of those situations that has stuck with me.