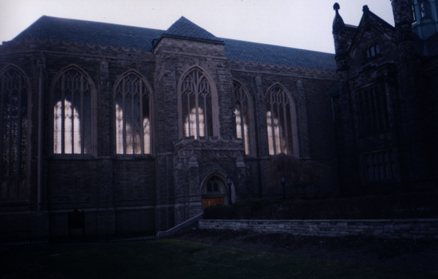 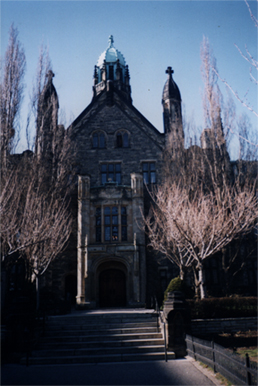 
Personally, I know that spot in the steam tunnels, and I think it's a load of hogwash; there is an odd area that is bricked up in a kind of uneven way, but I doubt that there's anyone behind there. It's just in a weird location, as it's right around a corner in a darkened area of the tunnels.

There *is* a ghost in the Chapel, no question. I have heard a report about a person who was playing the organ one night up in the choir loft and kept seeing movement in the front of the chapel out of the corner of their eye.

From what I was told, it seemed like there was something crawling about on the floor at the front of the chapel, but it was really too dark to make it out. It was also said that there was someone peeking out behind the front pew of the chapel, looking back up at the person playing the organ, but when they turned their head to look, the figure would slink behind the pew and vanish.

This person was upset enough by this that they finally went downstairs (quickly enough so that had anyone been in the chapel, they would have seen them leave), and had the porter call Campus Police. They came and searched the chapel, and found nothing.

Seeley Hall is also haunted. When the college was moved to this location in the twenties, there wasn't enough money to build a proper chapel at that time, so the room that was meant to be the library, Seeley Hall, was used as a chapel for many years. As a result, the room seems redolent of a strange eeriness. Many people in college avoid it at night, and I know several people who've had weird experiences there.

One person who was walking down the stairway past the entrance to Seeley one evening, and heard a string quartet rehearsing. The door was slightly ajar, but only enough so that they could see a small crack of light. When they opened the door to see who was rehearsing they found that there was no one there.

And finally, there is a friendly ghost in the college, who goes by the nickname of "Windy Lindy". His first name is actually Linden. He was a professor who lived in what is currently the Dean of Men's apartment.

He passed away many years ago, but he knocks on doors on a particular floor, and opens locked doors all the time. He's nice enough at least to not open them when any people have gone any further than the washroom (I don't think he wants to have belongings stolen).

One of the the people on the floor that Lindy frequents was actually changing when he thought it would be funny to open the door right then.

So yeah, the whole front façade of Trinity College is haunted for the most part, with a number of different ghosts. 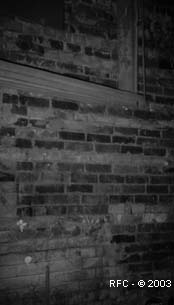