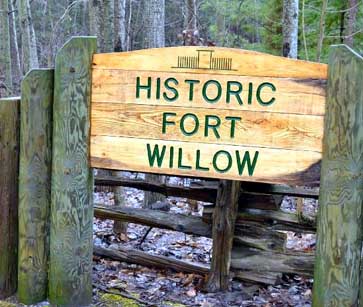 As a War of 1812 re-enactor, I am always fascinated and intrigued when a bit of ghostly lore comes from a nineteenth century military site, and Fort Willow in Minesing has not failed to give me some fodder to consider.


The fort's site is run under the auspices of the Nottawasaga Valley Conservation Authority with help from The Friends of Historic Fort Willow and is open to the public to tour although it should be noted that although a palisade and gate exist, the buildings are merely outlined on the ground as they stood back when it was an important supply depot due to it's convenient location halfway between Kempenfelt Bay and the Nottawasaga River along the Nine Mile Portage.


It was in heavy use during the conflict between America and Britain (Canada) and continued to be an important site feeding bases and communications between the upper and lower Great Lakes until the buildings (a blockhouse (large building used to house goods and troops,) a blacksmith's shop, a barracks and cookhouse, a building for barracks with a storehouse, a separate Officer’s Quarters Cookhouse and of course, Officer’s quarters, and even a separate Visiting officer’s quarters building,) were reported as being burned to the ground in 1835.


There were attempts to rebuild some of the buildings as a museum in the 1950's and 60's, but fire once again scuttled the site.


In the late 1960's, the Fort's grounds came into the stewardship of the Nottawasaga Valley Conservation Authority who cleaned up the site. erected the palisade and put up the initial signage of the site to alert visitors to it's historical significance.  The trails and site are maintained to this day by the same group.


The fort has run "ghost walks" around Halloween in the past, but to be completely honest, outside of reenactors, I was fairly uneducated about the site until an interesting photo posted by a reenactor in the late Summer which seemed to show a soldier (in red coat and shako,) looking somewhat ethereal walking near the gate.  The photo was posted not as a hoax, but sadly, I was unable to get permission to post it (here or otherwise, and I did send the fellow a message through Facebook,) and can't say for sure... well... anything about the image.  It's interesting, to be sure, but it's impossible for me (here and now) to say it wasn't a more natural image rather than supernatural.


The same fellow then posted up an article from MuskokaRegion.Com about the ghostly tales of Fort Willow.


The article mentions that the location of the fort's site, is one that almost deserves a good ghost story... in so much as it's in a forested region somewhat away from  urban settings... "darkness", the writer said, "overshadows the expanse at all times, even on the brightest of days."


Sadly, the article doesn't relay what exactly are the "ghostly happenings" reported at the fort, but it speculates (oddly enough) a cause in terms of a couple of historic reports of a lost village around the fort that sprouted at the end of the Willow Creek Portage which was home to enough to cause the CPR (Canadian Pacific Railway) to note that in building near the fort, they dug up several graves in order to facilitate the laying of track.  (Though some may argue the point, the disturbance of burial grounds is shockingly not all that common in terms of ghost stories and reports outside of speculation or 'Hollywood-ization' of explaining things.)   Since ghosts tend to be seen and experienced by people in places where the people they're thought to represent lived, played, worked, and/or died rather than where they are buried, the idea that the experiences are somehow linked to a soldier who passed away at the fort, (not at all far-fetched as disease and illness took more lives than musket balls,) is probably more... well... likely?  Although really, who knows.


As stated, the fort's site is open to the public and well worth a visit... though remember, there are few amenities at the site (no running water or electricity,) and please remember to pay the very small admission ($2 per person at the time of this writing,) at the fee stations based at the opening of the trail to the fort.


Remember to check the fort's websites (and the NVCA website,) for events including not only the ghost walks at Halloween, but an annual history festival as well.


PLEASE NOTE: Torontoghosts, Ontarioghosts, and PSICAN are not responsible, in a partnership with, or working with/for the Fort Willow site or it's related parent and care-taking bodies.  Please see these links for details about the fort...