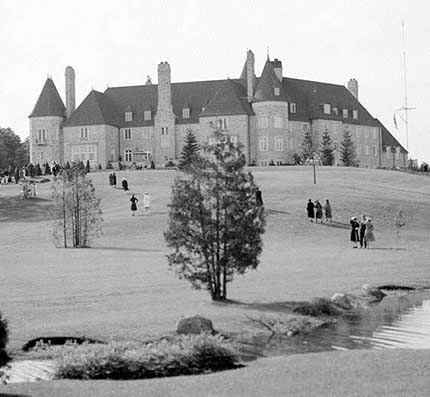 Here is story sent by one of our readers...

I was recently attending a wedding at Eaton Hall, a building within the Seneca College Campus (just north of King City), and I heard rumours of ghost sightings within the building. I'm looking for some history or any information regarding this place.

Here's what I know so far:

Sir John Craig Eaton is the original owner but didn't live long enough to see its completion. Lady Flora McCrae Eaton was his wife; she lived there. This establishment served to care for burn victims from World War II. One of their sons hanged himself on the third floor in a 'circular' room (the room is located to the left of the elevator). Their other son apparently drowned in the lake. Lady Flora supposedly walks the halls; some staff members have seen her. One staff member said, "...if you see her, say hi". Lady Flora died in 1991 (not very long ago).  (Editor's Note: We missed this on the original post, and thanks to another reader point this out... we should correct this... Lady Eaton passed away 1970. We apologise for any inconvenience or errors this might have caused.)

This is all the information I can find about the Hall. If you can find anything, my wife and I would love to hear it. I've done a lot of searching on the internet but haven't found a single thing. I'm gonna check out your links and see if I'm lucky.

Thanks for your time.


UPDATE:
This was recently sent in by another reader...

In and around November, 1998, my friend and I took a Feng Shui class at Eaton Hall. Oddly enough, my friend and I are writing a book of our own on local hauntings, and the story of the "little man in the little room" (the circular one near the elevator, I believe,) intrigued us.

We went on a tour of the upstairs corridor where the door is located and locked. It's been locked, I believe, forever! I definitely felt that there was something behind the door and my friend, kidding around for the class I suppose, knocked on the door and said "hello in there" or something like that.

What happened next still makes the hair on my neck stand on end, since in a very clear, very small voice, we heard, "HEY!" I guess he was annoyed at us for having disturbed him. Several people in the group also heard it and decided to hightail it out of there rather quickly. I do believe in the "little man in the little room."


The following is another addition sent to us by one of our readers...

A few years back, my wife (fiancé at the time) and I were perusing places for wedding receptions. Part of our hunting included Eaton Hall. I remember feeling somewhat uncomfortable in the building and we both agreed it wasn't what we were looking for.

Recently, an acquaintance of mine told me he worked at Eaton Hall while attending college. When I told him I read there were supposedly "ghosts" where he worked, he replied "of course there are." Apparently, he and another staff member witnessed a semi-transparent figure void of colour from behind staring out of a window in an empty room - it was a woman dressed in turn of the century clothing.

Although this person doesn't wish to talk about it for fear of being labelled negatively, I felt this point of interest must be brought to light. Although I have difficulty believing in ghosts, I also have difficulty not believing this person's testimony since they are also an honest friend.

A Lost Update sent to us a few months ago as we were switching servers. Unfortunately, it got lost in the shuffle but we've added it back. Many thanks to the person who submitted it for bringing this to our attention...

I was a staff member at Eaton Hall in 1983. One of my tasks each night was to check the hall and make sure everything was alright... like a security patrol. I was about to leave when my girlfriend at the time came up and wanted to go on a late-night campus tour. I figured it should be ok, since it was close to 11:30pm or so at night and we wouldn't disturb anybody.

It was late December and it gets pretty cold at night, so my "last rounds" were done pretty fast.

When we arrived at Eaton Hall, I opened up the front door and as I did, the lights in the front hall, and the fountain suddenly and without "human assistance" started up! This was unlike any thing that I had ever seen before and made the hair on my neck stand up.

There was also a picture of Mrs. Eaton above the fire place, and recall that she would follow you with her eyes, any way you looked. This was just a few things that happened within the first 5 minutes of being inside the great hall.

We walked around the upstairs halls and checked the doors and heard what sounded like elevator music down stairs. Needless to say, this was also a little out of the norm.

So having heard this, we ran down the great winding stair case passed the totem pole and into the front hall. All of a sudden the music stopped, and a humming noise begain very loudly in the banquet hall. (This is just to the right of the fountain as you came in the front doors,)

Suddenly, the "elevator music" started up again, and the contrast of music and humming was really starting to get to us. I walked into the banquet hall and yelled out "Hello!" a few times. Every time I yelled, the humming would stop. I then left the room and the humming started up again.

Of note, to me the humming was very calm like and sounded like an angels voice but either way, all this was just a little much for us to take, so we ran out the front doors and have never been back since.

Effectively, I quit my job right on the spot!!!

I read with great interest the items on the ghosts of Eaton Hall. Other than a elderly maid, and a couple of servicemen in WWII. No one of significance has died at Eaton hall. All the children lead upstanding and long lives. Lady Eaton died in her home on Dunvegan in Forest Hill in 1971 (just down from the Timothy Eaton Memorial Church.) The funeral for Flora Eaton was held at the church and the funeral home was AW Miles. She is entombed with her husband Sir John and the rest of the Eaton's in Mount Pleasant.

Sir John never saw the present Eaton Hall. The family at one time used another house on the Eaton Hall property for a summer home. Sir John and Lady Eaton at one time lived at Ardwold , which was near Casa Loma. Sir John died in this house in 1922. Lady closed the house and lived in Europe for many years. In 1935 she returned and ordered Ardwold be demolished. A new house was constructed in King which is the current Eaton Hall. Some of the fittings of Ardwold were installed in the Hall. The only building that survives Ardwold are the massive entrance gates and the gate house on Spadina (next door to Spadina House.)

Lady Eaton lead a very peaceful life. I doubt very much if she would return to haunt anyone. Eaton Hall is not air-tight and does have a down daft in the stair case. In renovation of the Hall into a training centre there is now piped in music that is played on occasion this might have been any music one would hear.

The reader went on to say that they had been involved intimately with the hall for many years.

Please Note: This website does not preach "belief" or "disbelief" to any of our articles online. It is for information and sharing only and some views may not jive with other's. Still, remember, it is important to understand both sides of any story in the realm of research and we, at the GHRS, Torontoghosts and Ontarioghosts are not saying one person's opinions or views are or should be everyone elses. We try, when possible, to allow for all person's views, thoughts, notes and observations on all our articles.

With this in mind, please, keep the information about this site coming. Again, if you have something to share, please This email address is being protected from spambots. You need JavaScript enabled to view it.

Hello, I am a former employee of Eaton Hall and had years of being alone in the building late at night. There were indeed many creepy and uncomfortable elements of the manor, many of which other witnesses have alluded to. However my experiences are a little different not quite "paranormal" although it would not surprise me if it was indeed frequented by ghosts.

The turret room by the elevator on the third floor in locked and unused because it is a storage room were old files and seasonal decorations are kept, also it isn't insulated as well as the occupancy rooms. I have gotten stuck in the old tiny elevator (one of, if not the first elevators in Ontario) and to this day have a paranoia of confined spaces as a result, also spending time in the large walk in bank safe in the lower level added to this. I would never go in there if I was alone in the home for fear it would close on me as I was 1 of only 2 or 3 people who knew the combination and it was pretty sound proof, this is where silverware and vintage liquors were stored.

The sounds of elevator music turning on and off is not uncommon as we had a music system filtering into all common areas were some speakers worked some didn't on occasion. The outer fountain was also on a switch controlled from inside, which would explain it going on and off. An occurrence which would happen is myself locking up for the night and shutting off everything, but as a drive away I would see lights on on the third floor, needless to say I would not venture back to shut them off.

The creepiest place if your are ever "fortunate" enough to view is the boiler room beneath the hall with its monstrous boilers that hiss and whine in the dark cave like bowels of Eaton Hall.

Our thanks go out to the witness for sharing this with us. If you have experienced something similar or can add to this information please contact us This email address is being protected from spambots. You need JavaScript enabled to view it. Your privacy will be protected. Confidentiality is assured.