As a precursor, please do not see this report as a negative or so-called sceptical (Read: Non-believer) of the ghostly stories of the tunnel. It's just a note of the variations and the absolute conviction of the teller's of this tale about the "truth". The "Screaming Tunnel" is a definite legend and a great story! 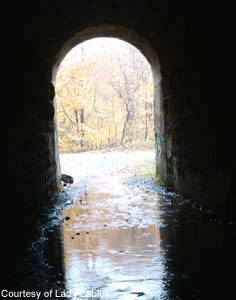 Our first reporter had the tunnel closer to Hamilton than Niagara and then the City of St. Catharine's claims it but so does Niagara Falls and Niagara-on-the-Lake.

Truth is, it's sort-of in between ALL of these and can be claimed by all of them.

Sadly, though, people (and we've had many,) are very adamant about the "truth" when it comes to the story. We have had over sixteen variations all of which we were assured were the true versions of the ghostly legend of "The Screaming Tunnel".

Like our Toronto story on Grenadier Pond, here is another "drop down box" legend that you can play with to see the variations. Some things stay the same BUT other things change during the telling. All, without a doubt, have been claimed as true by the contributors.

The issue seems to be that people are VERY territorial about the "Screaming Tunnel" and we have managed to source out ONE thing to help straighten our the stories and eliminate some of the versions. The tunnel (the one near Warner Rd. which is the most often quoted "real" one) was built by the Grand Trunk Railway company just before the outbreak of World War One in their grand scheme to have a railway that ran the same grounds as the Welland Canal. Sadly, the project was abandoned due to financial issues and then totally given up with the outbreak of the war. The "Screaming Tunnel" is one of a few of these railway tunnels to nowhere made for a railroad line that never existed.

We are still looking for a deed or property right to a house "behind" the tunnel but so far, we've come up blank.

A "ghost expert" in Niagara-on-the-Lake has described the tunnel as "The Stinky Tunnel" and after visiting it, we would agree. The natural smell of sulfur is heavily prevalent. Like many spots, there is a chance that the story is a wonderful legend made up and repeated for many years by the hoards of teenagers that still frequent the spot as a "drinking" location. Empty beer and other alcoholic beverage containers litter the ground and scribbled graffiti on the tunnel walls contribute to the rather negative atmosphere of this odd, old tunnel.

The tunnel's reputation as "spooky" place was established even more when David Cronenberg used the tunnel as a backdrop in a scene in his film, "The Dead Zone".

Until we find a police report or something to solidify one of the legends, the "Stinky Tunnel" remains a legend of Niagara that has been passed down from literally generation to generation.

Is it haunted? Maybe. Is it a WONDERFUL legend and a lasting story passed along? You bet! Does it REALLY smell in the tunnel. Yup. 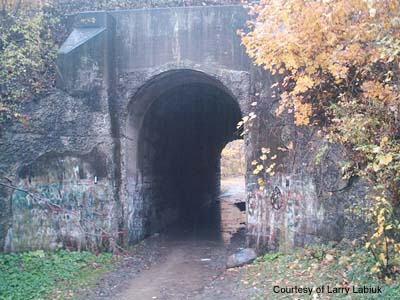 If you have anything to add to this report or can assist us with finding evidence of one of the legends (please, we do need a published report from a newspaper (not a Halloween "ghost" report,) or government source,) please contact us at This email address is being protected from spambots. You need JavaScript enabled to view it.