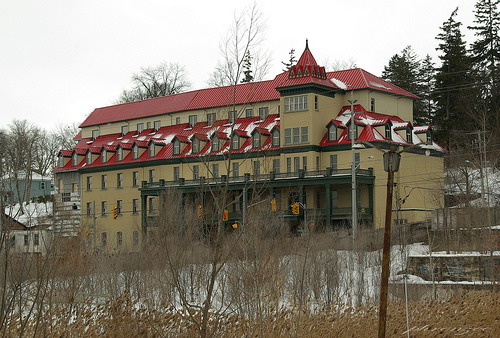 Here is an interesting tidbit from someone out in Cambridge...

In Preston there's an old hotel on the corner of King St and Fountain St. I have heard rumours in the past, mostly in high school, about it being haunted. I can't remember exactly, but I recall something about a certain room that makes your stomach drop, and makes the hair on your neck raise.

Now, I've been in there a few times myself.. as it's unused right now, and when I was younger my friends and I went in to explore. We didn't find anything supernatural going on, but we weren't really looking for it either.

I've learned bits of history of the hotel over the years, apparently it was built sometime in the late 1800's, early 1900's, because of a natural spring that ran close by to it.

The people believed this spring had healing properties, and it was a local hot spot for tourists and celebrities. It closed down sometime later, and was reopened as a nursing home until 10 or so years ago, when it again closed, as it remains.

I was just wondering if you could post this to see if I can get any confirmation about paranormal activity there.


The following was sent in by one of our readers as an addition to this story...

A few friends and I went to the old hotel to check it out a month or two ago. (I lost the address to this site, so I couldn't tell you earlier). We went in, being careful and quiet because a few people had already been arrested for going through the place. We'd all heard the stories about the "weird room", but failed to find it. The only events of any note are these;

At any rate, aside from these unusual situations, we noticed nothing else. On a side note, the hotel is now being rebuilt as a Nursing Home again, so maybe more reports will come out of it.

In 2012 we received the following account and photo posted above:

It was once a very prestigious hotel and then it had to close its doors due to their inability to keep up with the times people from all over the world would come to bathe in the sulphur spring in the hotel. Years later it was a retirement home that also had to close its doors. It is a beautiful building and has been purchased by young entrepreneurs with lots of money to redo it and reopen it but there has been accidents, deaths and unexplained technical problems. One man who was a keeper of the grounds and was pushed down the stairway after investigating a light on the 4th floor and the building has no power so he thought there was trespassers in the hotel. He was pushed down the main stairway and while laying on the floor at the bottom of the stairs was a man staring at him with a grin and a see through torso. Below is a picture of the building it's beautiful and has sat empty for years someone inside wants it left alone and sometimes stands in the 4th floor window watching traffic below.

If you have any information about this site, please contact This email address is being protected from spambots. You need JavaScript enabled to view it. and we will pass along or post the information.

It appears that the owners of the retirement home abandoned it including 30 residents and staff with no heating nor adequate food supplies to keep it going. This was brought up in Queen's Park as a concern for lack of laws protecting seniors within these homes in the province of Ontario, and the home itself was shut down:

Mr D. S. Cooke: I have a question to the Minister of Health. I am sure the Minister of Health is aware of the very sad and unacceptable situation at Preston Springs Gardens Retirement Home in Cambridge, where for the last 10 days the staff of the facility have been bringing in food to feed the 30 residents and they have had to pay for the fuel in order to heat the home, as the owners have abandoned the rest home and just yesterday it went into receivership.

What is her ministry or the government doing to protect these 30 residents and plan future appropriate placements for them as quickly as possible?

Hon Mrs Caplan: I would like to refer the question to the Minister without Portfolio responsible for senior citizens' affairs.

Hon Mr Morin: I am appalled to hear that seniors may have been left with inadequate food and heat for a period of 10 days and that none of the appropriate local officials was notified.

Let me tell members what I did. As soon as I found out about this situation, my staff immediately, this morning, contacted local officials, including the placement co-ordination service and the medical officer of health, and put all appropriate people in touch with one another.

I want to assure you that every resident of Preston Springs Gardens Retirement Home will be properly cared for and will have food and heat. Representatives of the receiver, Touche Ross, met with the administrator of the home today to discuss the future of the home. I have been advised that the receiver plans to keep the home open.

Mr D. S. Cooke: I am certainly glad to hear that the minister and the government have become aware of the situation after 10 days of this going on.

Perhaps what the minister could respond to is the other question the people in Cambridge are asking themselves today. The Liberal government of Ontario said five years ago that the whole issue of retirement homes and rest homes for seniors was going to be studied and that proposals for a legislative response would be coming forward. That was five years ago. Now we have this problem going on. We have no standards, no staff requirements, nothing to protect these people. It is not anyone else's fault for this situation, other than the minister's and his government's. When is he going to act to protect these people?

Hon Mr Morin: Even if there had been provincial regulations, this incident would not have been prevented. I know this for a fact. I am concerned with the wellbeing of all senior citizens, all across Ontario, of any place. This is a very complex issue without an obvious solution. There is not even a definition of what a rest and retirement home is all about. Municipalities can license and regulate rest and retirement homes, and a number of municipalities do so.

However, I am deeply concerned about the quality of care being provided and I am looking into the lack of standards in this area. My advisory committee submitted a report with all kinds of recommendations. There is not even a consensus. My role as the minister responsible for senior citizens' affairs is to act as a facilitator. I have the co-operation now of the Ministry of Health, the Ministry of Community and Social Services, the Ministry of Housing, the Office for Disabled Persons and my ministry.

The Speaker: Thank you.

Hon Mr Morin: We are looking into the issue. We are concerned and I hope to be able to find a solution in the near future.