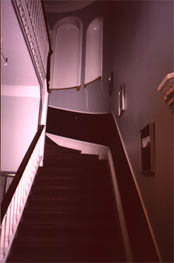 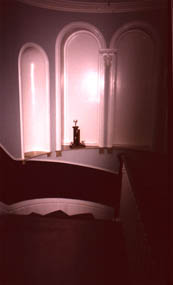 Our first "group" experience was at the top of the main staircase (pictured here...)

On our "tour of the premises", the radio program host showed us the upstairs. At the top of these stairs, (pictured right,) Matthew was the first to have a problem. He honestly thought he was going to have a "panic attack" and Later described the feeling as "being hit in the chest with a heavy foam bat."

Next up the stairs was one of our staff members by the name of Tamara Zyganiuk gasped and looked at Matthew, "Did you feel it too?"

Toni and Dave also experienced this feeling but notes weren't compared until the group had made its way out of the building after the tour. Both Dave and Toni described it as "being out of breath".

Frank, Melanie, Derek and the radio program host did not experience the same thing, which is odd. Later on, in the studio, one of the psychics, Dorothy, complained that she felt as if someone had died in the home of a heart attack as she had a tightened chest. She also said, with limited information, that the stairs were being blocked by the entity of the lady of the house who felt that the upstairs was PRIVATE territory and should not be being trespassed by us interlopers.

Allan Mills, a reporter for Northern Fusion magazine was there doing an article about the TGHRS and also had the same experience on the stairs and in the boardroom (see below) as did the Les Corrigan, the technician working on the web-cam that night and WebMaster of Target.

During the night, Allan often kept saying, "I'm only supposed to WRITE about this stuff!" 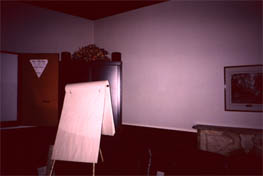 The next room that had an "experience" was at the top of the stairs is what is now a boardroom. We were told that there was the sound of a crying baby heard in that room from time to time. one of our staff members, Toni, Dave and one of the psychics were at that room a little later and had the same experience except far more powerful trying to enter this room. It was so powerful; it actually kept them from entering. 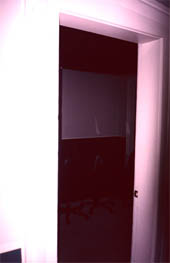 In a combination of bravery and stupidity, Matthew decided to challenge the "feeling" and was about to bolt through the door of the room to see for himself.

Proving comedy does not die, one of our staff members asked Matthew, "What if you get the heebie-jeebies in there?"

Matthew responded, "Then I'm outta there as quickly as I can move."

Matthew bolted in a fast walk past the doorway and into the room leaving one of our staff members at the threshold.

Once in the middle of the room, an ominous creaking was heard and a staff member no longer on our team and Matthew witnessed the door slowly closing behind him with a terrible noise.

The former staffer asked, "Is that the heebie-jeebies?"

Matthew, without missing a beat, left the room as quickly as he had entered saying "Yup."

The doorway had been walked through SEVERAL times during the night and the door had not moved nor been moved so it was odd that it was then that it decided to move.